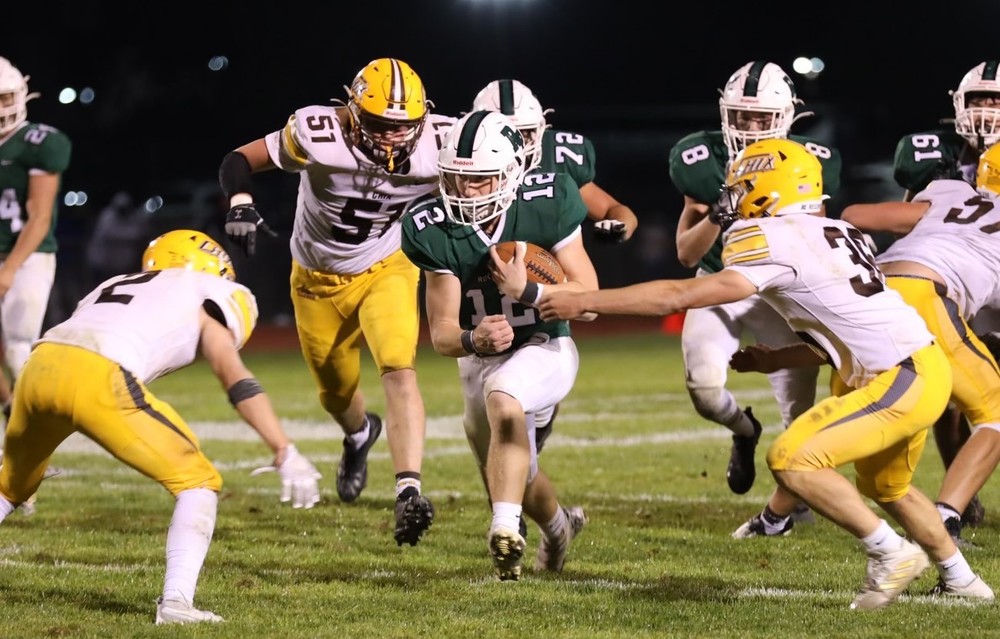 Rockets pull out a close one against Zeeland East, improve to 5-1 on the season

The last time the Reeths-Puffer football team defeated Zeeland East, the Rockets went on to quality for the state playoffs.

That was way back in 2013, which was also the last year the Rockets made the playoffs.

Reeths-Puffer lost the next four matchups against the Chix, but finally ended that streak on Friday night with a very tight 20-18 victory in their Homecoming game.

Could that be an omen suggesting that R-P is headed back to the postseason after the long drought?

The game was tighter than expected, but a failed two-point conversion late in the contest by Zeeland East allowed the Rockets to escape with the win. 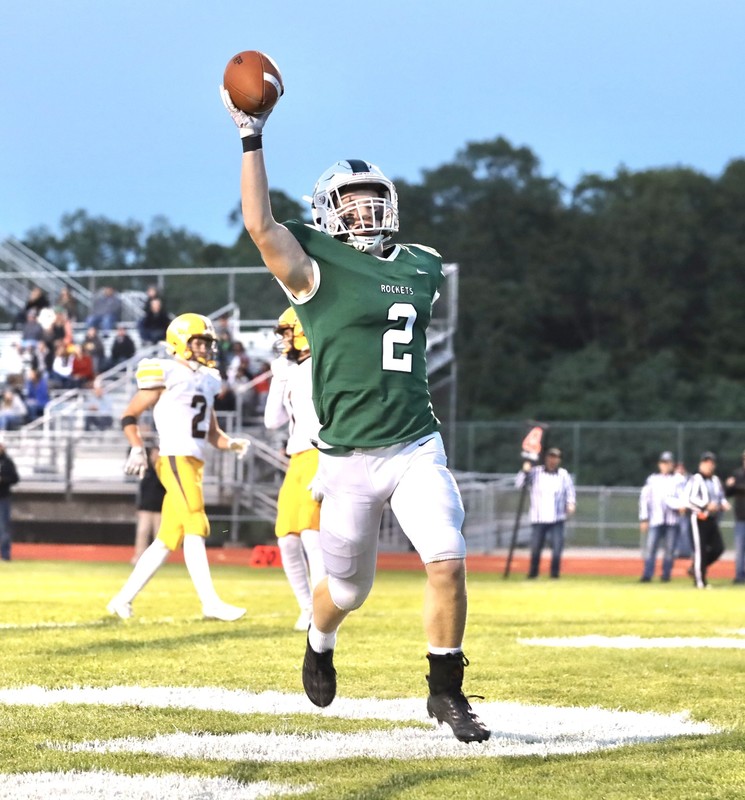 Reeths-Puffer improved to 5-1 on the season and 3-1 in O-K Green Conference play.

“A win is a win, and we moved the ball well offensively,” said Reeths-Puffer coach Cody Kater. “We had a bunch of penalties near the goal line, but I am still happy with how our offense played.

“We are going to get better defensively, and we are working on our weaknesses, but we are still happy with this win.”

Reeths-Puffer now moves on to a couple of tough tests in the next two weeks, against Zeeland West and Mona Shores, before closing the regular season on the road against Lansing Everett.

“We will be preparing to play against two great area programs,” Kater said. “We have a young staff that we have put together here, and we are excited about playing against these great programs.” 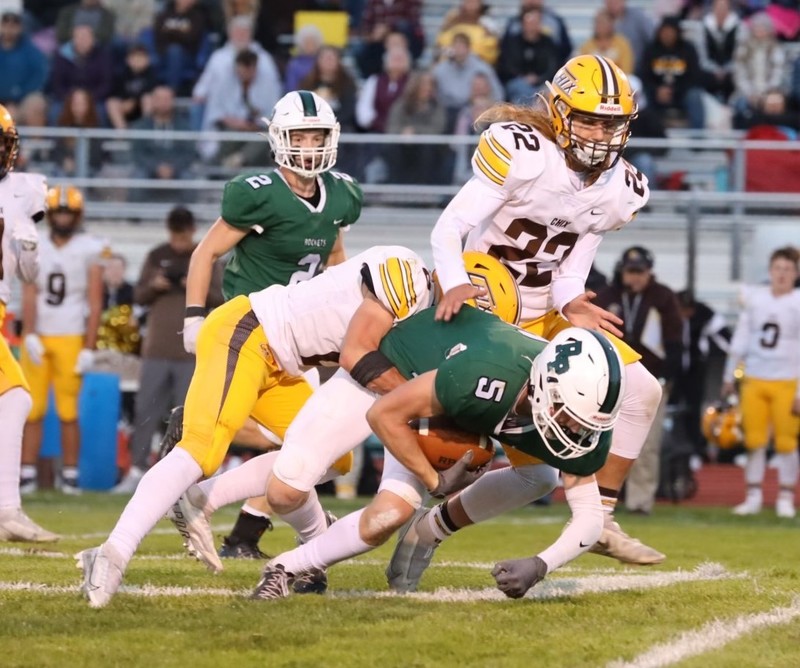 The Rockets struck first on their first possession of the game with a 13-yard touchdown run by Brody Johnson to take a 6-0 lead.

Zeeland East nearly tied the game on its first possession, moving the ball 63 yards on 14 plays, but the Chix stalled out on fourth down just inside the R-P 2-yard line.

Reeths-Puffer then traveled 98 yards on 15 plays to add to its lead.

The drive ended with a 12-yard touchdown pass from quarterback Brady Ross to Bryce Ross. Brooks Johnson added the extra point to give the Rockets a 13-0 lead with 6:40 left in the second quarter.

The Chix finally responded late in the first half, scoring on an eight-yard run by Nick Williams to cut Reeths-Puffer’s lead to 13-6 with 59 seconds remaining. 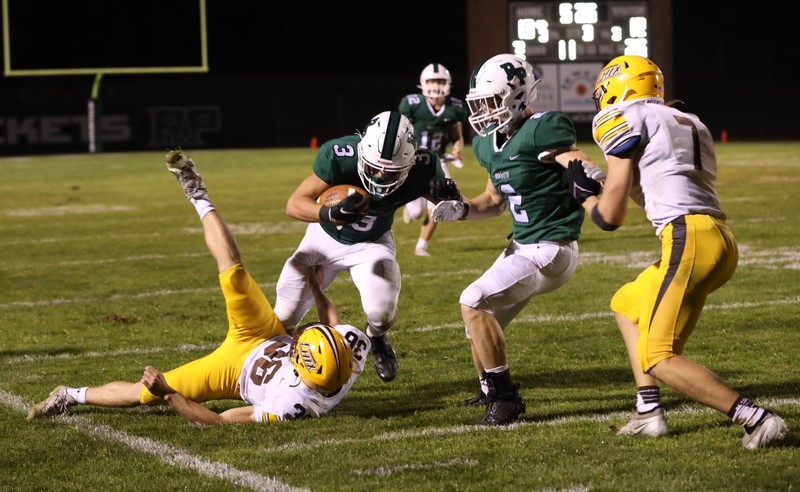 Zeeland East opened the second half with the ball and drove it 65 yards on nine plays before scoring on a 10-yard touchdown run by quarterback Austin Keur.

The extra point, which would have tied the game up, hit the crossbar, which kept the Rockets ahead by a slim 13-12 margin.

The Rockets managed to move the ball all the way to the Zeeland East goal line on their next possession, but two false start infractions pushed the ball back 10 yards and R-P ended up turning it over on downs.

Reeths-Puffer stepped up defensively on the last play of the third quarter with an interception by Tayte Vanderleest at the Chix’ 26-yard line.

The Rockets took advantage of the turnover, scoring five plays later on a one-yard touchdown scamper by Brody Johnson with 9:33 left in the contest. 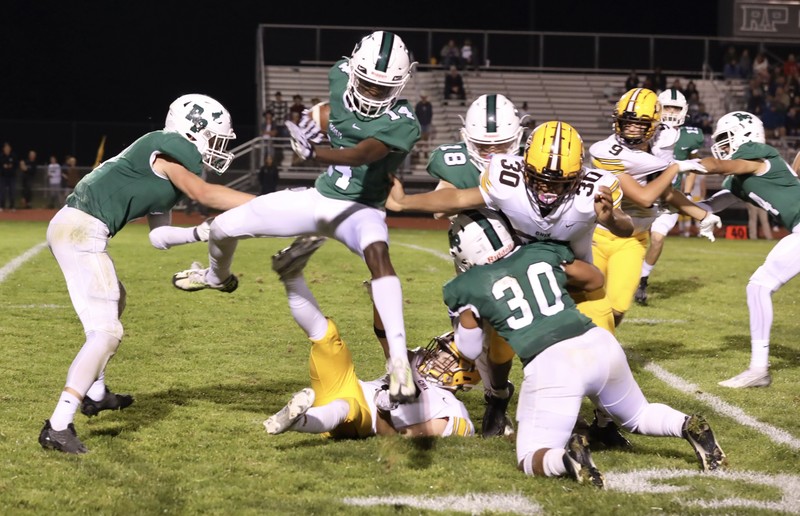 A Rocket ball-carrier ties to work his way through a scrum of players. Photo/Joe Lane

Brooks Johnson added an important extra point to increase the Rocket lead to 20-12.

Zeeland East responded with a touchdown on the 11th play of its next drive on a fourth down situation.

Keur found Ethan Rosenberg in the back of the end zone from 28 yards out to cut Zeeland East’s deficit to 20-18.

The Chix attempted to tie the game with a two-point conversion, but the pass was broken up by a Rocket defender.

The Rockets got the ball back with 4:43 remaining in the contest and managed to run for three first downs to seal the victory.

Brady Ross paced the Rockets offensively, going 13-for-20 passing for 122 yards and a touchdown, while rushing for 92 yards on 12 carries.

Bryce Ross caught five passes for 62 yards and a touchdown while Vanderleest had five receptions for 39 yards.

The Rockets were led defensively by Tyviea Williams with 7.5 tackles and Caiden Bolduc with six.