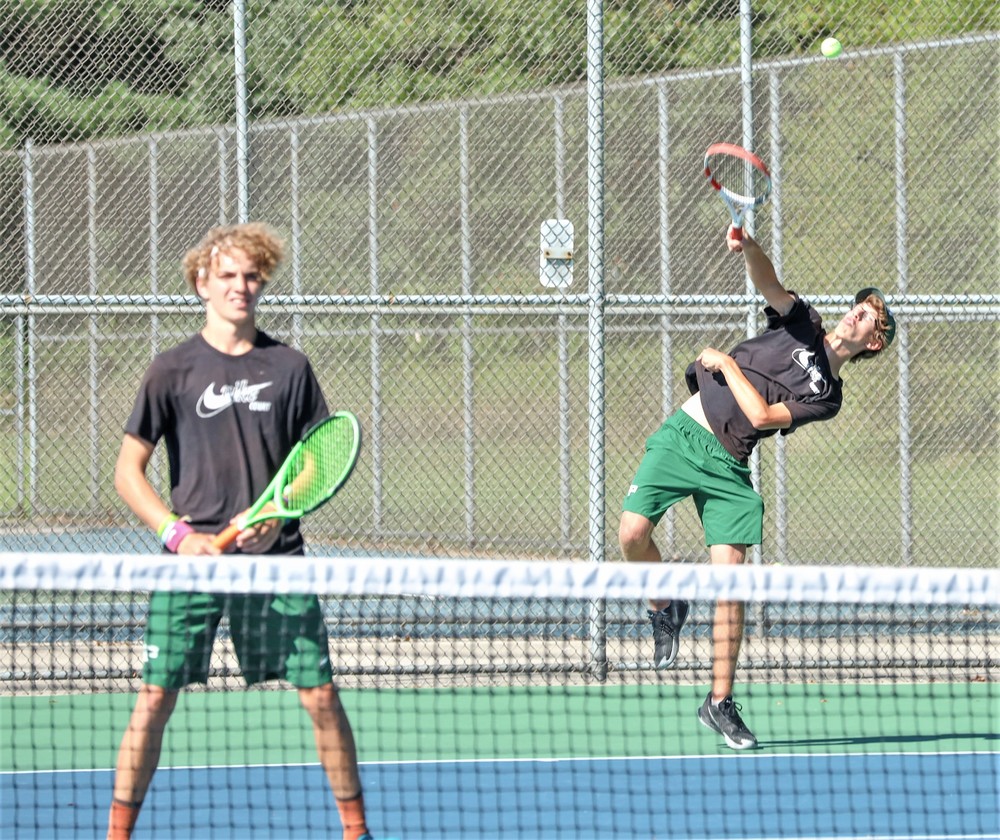 What a combo! R-P's Jake VandenBosch, Zade Rogers are a perfect 12-0 at No. 1 doubles

Sometimes a midseason adjustment is all it takes to create something special.

VandenBosch was the Rockets’ No. 1 singles player, tasked with going nose-to-nose against the best opposing players every night. Rogers and teammate Caden Malotke formed R-P’s No. 1 doubles team.

Rogers and Malotke were doing quite well, but VandenBosch was struggling at the top singles spot. He eventually lost that position in a challenge match against talented sophomore teammate Quinn Alderink and could have moved down to No. 2 singles. 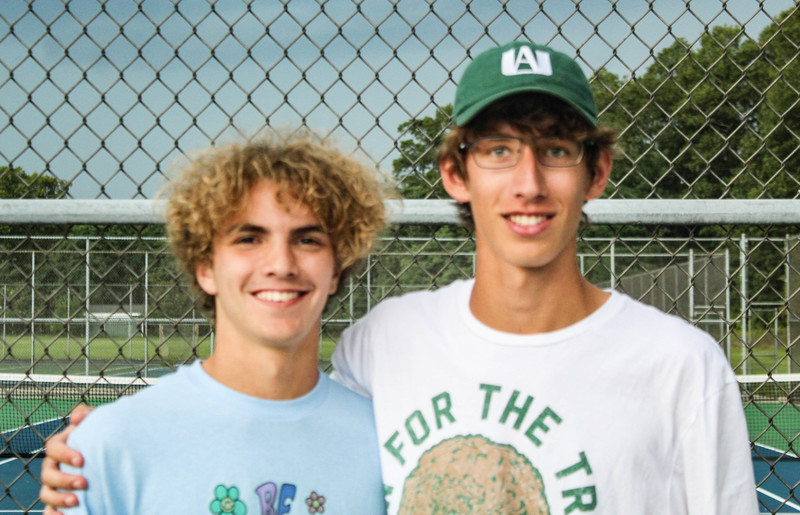 But Coach Ryan Hankinson had a better idea. VandenBosch has always been a great doubles player, so Hankinson moved him to No. 1 doubles to partner with Rogers, while moving Malotke to No. 3 singles, where he has been doing well.

Hankinson figured his new top doubles combo would be pretty good – but even he didn’t realize just how good they would play.

VandenBosch and Rogers, who had never played a high school doubles match together before, have been on an incredible roll, posting a perfect 12-0 record. They will be among the favorites in the No. 1 doubles flight at Saturday’s Greater Muskegon Athletic Association tournament.

VandenBosch was part of R-P’s successful No. 1 doubles team with Alex Orchard last season, and said he was happy to return to doubles after a stint at singles, a role he hadn't played since his sophomore year.

“It was hard to get used to it again, and it didn’t feel like it was going anywhere,” he said. 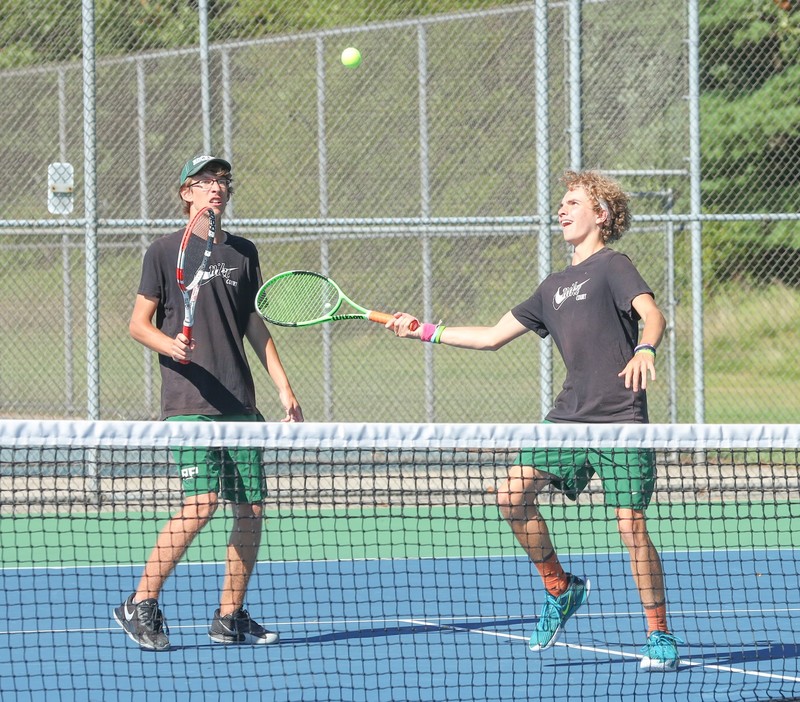 Rogers gets ready to return a shot in front of VandenBosch. Photo/Joe Lane

VandenBosch expected to do well while partnering with Rogers, but he wasn’t quite ready to predict an undefeated record after 12 matches.

Rogers said he and Malotke were a good team, but figured he and VandenBosch would be even better.

“I loved playing with Malotke, but I think me and Jake take it up a notch, since Caden hasn’t been playing tennis quite as long,” he said. “Jake and I have known each other for five years now. We’ve always been friends and done drills together, so we are able to be in the top tier of doubles teams.”

Since teaming up, VandenBosch and Rogers have mowed through their opponents with relative ease, losing only one set through 12 matches. 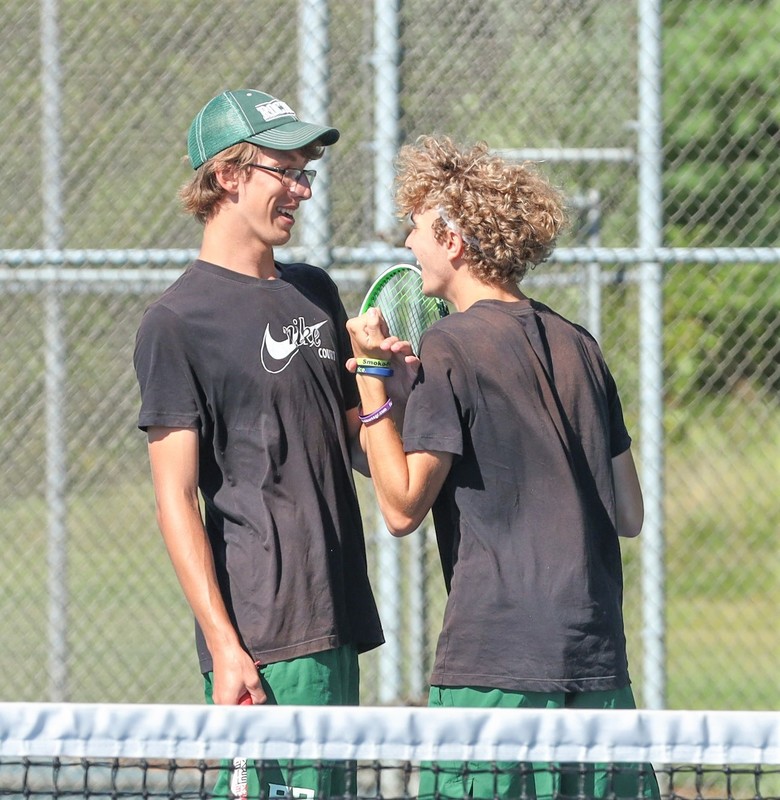 VandenBosch and Rogers congratulate each other after a point. Photo/Joe Lane

They’ve beaten some very good opponents from very good programs, including Mona Shores’ Liam Gossett and Tommy Stewart on Monday by a 6-3, 6-2 score.

Their most impressive win came against Zeeland West’s Landen Mosbauer and Simon Moore.

Reeths-Puffer, like all the other O-K Green tennis teams, took an overall beating against powerful Zeeland West, losing seven of eight matches. The No. 1 doubles match started out like an eighth loss in the making, with VandenBosch and Rogers being crushed 6-1 in the first set in only 23 minutes.

But the seasoned seniors remained calm, got down to business and won a tight second set 7-5 and the third set 6-3 to capture the match.

“I approached them after they lost in 23 minutes and asked them what’s going on, and Jake, a man of very few words, looked at me and said, ‘We got this, coach,'" Hankinson said. 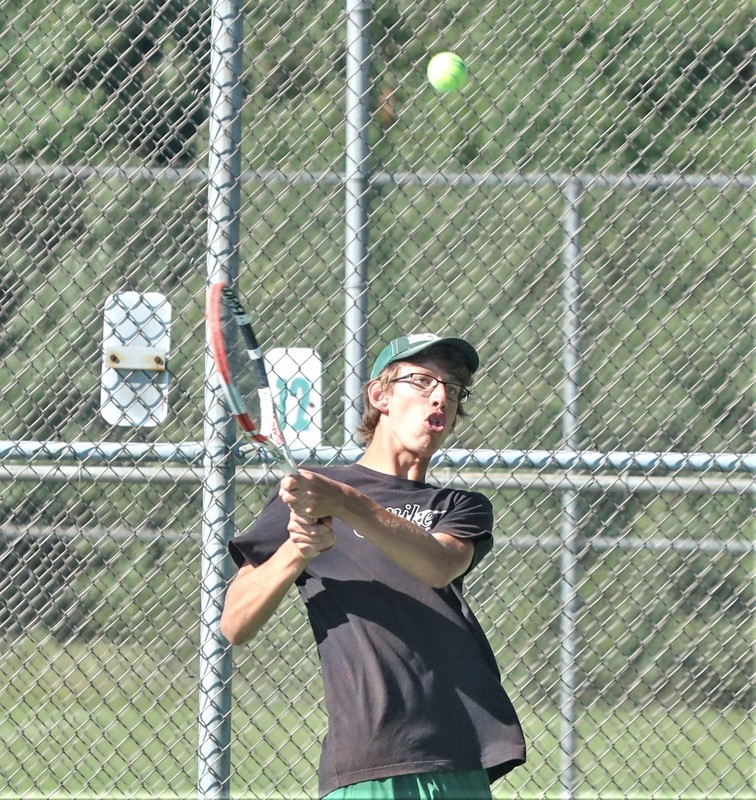 VandenBosch returns a shot from deep in the backcourt. Photo/Joe Lane

Despite that confident reassurance, VandenBosch said he had to beat back some doubts after the ugly first set.

“I was feeling a little apprehensive,” he said. “I just had to bring it back and be more focused and keep my head in the game.”

Rogers said it took a good butt-kicking in the first set to wake the two of them up.

“In the first set I think we were relaxing and not taking it as completely seriously as we could have,” he said.

Hankinson said the two seniors have certain strengths as a combo that make them formidable. 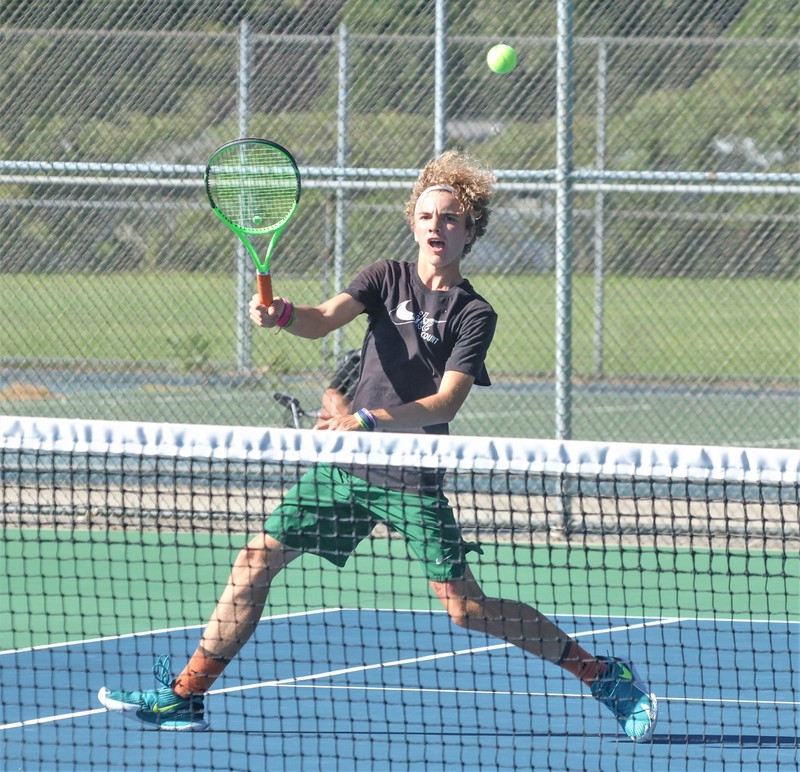 Rogers gets to the net to return a shot. Photo/Joe Lane

“Jake is not quite as athletic (as Rogers or Malotke),” the coach said. “He’s going to lose a foot race to them nine out of 10 times, but he’s so good at the net that it’s okay to just leave him there.

More than anything, Hankinson said the two players are successful because of their passion for tennis, and he expects to see them around again next fall, even after they graduate.

“They’ve already asked me if they can come and help with the varsity next year, or coach the middle school team,” he said. “Jake has already appointed himself the vice coach of the JV team. They both just love the game.”